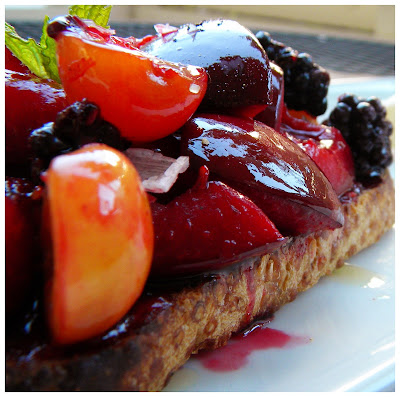 There is nothing quite like tomatoes on toast with a little salt, pepper and olive oil...unless of course you put plums and cherries on toast with salt, pepper and olive oil! The similarities between plums and tomatoes make this very easy and very tasty. The idea for this dessert came from a thought I had to make Olive Oil Ice Cream. I asked a few people and they had never heard of putting something that was generally used in savory dishes as a main ingredient in Ice Cream. There are so many blends and flavors of olive oil, that a stop at a local olive oil store gave me quite a few options. After sampling meyer lemon, and blood orange flavored olive oils, I knew I wanted the ice cream to have a savory quality...then I tried the Pendolino Olive Oil. It has light, fruity flavor that leaves a grassy finish and I knew that this was the flavor I wanted in the ice cream.
The Plums, Rainier Cherries and Blackberries were picked up at the farmers market and very little was done to the fruit. Raw sugar, honey, orange zest, orange juice and vanilla was brought to a boil and the fruit was added, tossed and removed. Gentle heat is used to keep the fruit bright and whole. Once I removed the fruit, I reduced the remaining liquid and used it as a syrup to pour over the assembled crostini.
Finished with olive oil ice cream and a drizzle of olive oil, this summer dessert is perfectly balanced; colorful, crisp and earthy...sweet, tart and savory. 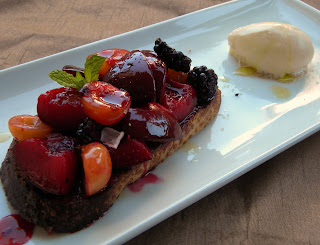