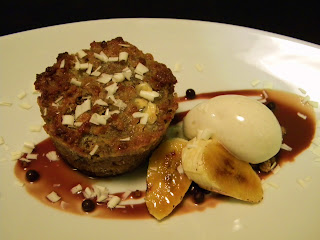 Happy New Year, everyone! After this incredibly busy holiday season at the restaurant and in my own life, I have come back with a ton of new ideas and and a brand new camera! The first post of 2010 will be of the dessert I served at the restaurant for New Years Eve...Banana Bread White Chocolate Bread Pudding. Chef gave me a recipe, I made it, tweaked it and produced it in mass quantities. This bread pudding called for banana bread, which is strange because it is so dense that I thought it wouldnt soak up enough of the custard which I flavored with white chocolate. I tried using day old (or 12 hours old) banana bread and fresh banana bread. The texture was much softer and soaking up the custard was no problem when I used bread that had just come out of the oven. Usually, bread pudding is made with Brioche, an eggy and deliciously buttery bread or with any strong day-old bread to ensure that the only moisture in the bread pudding came from the combination of cream, milk, eggs and sugar. So once the bread was cool, cut into cubes and soaked in white chocolate custard, I mixed in white chocolate chunks and scooped it into ramekins to bake. The top got nice and crunchy because I baked it in a convection oven which uses circulated air to facilitate cooking and browns the top...it also cuts the bake-time in half! I served this dish with caramel sauce, vanilla ice cream and a caramelized banana. For this post, I made a milk chocolate malt sauce with 33% milk chocolate and malt powder, white chocolate shavings, dark chocolate pearles craquant ( which are just little balls of crunchy chocolatey goodness) and again, vanilla ice cream and caramelized banana slices.
The chocolate sauce made the dish. The flavor of the milk chocolate and the slightly salty malt added an element to it that I thought was missing before. When I develop a composed dessert, I like to add different textures and temperatures as well as flavors. I have hot, frozen, crunchy, creamy, salty, sweet and aromatic...all of the things that make a dish just plain yummy.
Posted by Mariel at 7:47 PM