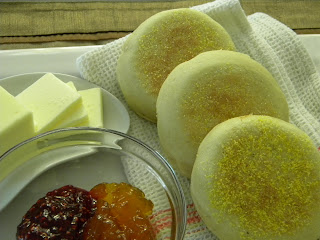 To be perfectly honest, I had never even thought to make English Muffins from scratch. I figured there is something strangely nostalgic about Thomas's "nooks and crannies" that I was fine just picking them up at the grocery store. Until the other night when I wanted to make a special "Breakfast for dinner" and I looked for a recipe for English Muffins to make Eggs Benedict. I searched through web images to find something that looked at what I wanted out of my English Muffin-big, fluffy and substantial...I figured flavor was up to me. I ended up finding a recipe on cookingbread.com. They provided a step by step "class" on how to make them, although I ended up changing the mixing method to use my stand mixer.
This recipe used beaten egg whites which added stability, and made them tall and fluffy. Once they had been mixed, shaped, and had their final rise, I put them on the griddle. 16 minutes later, I had huge, fluffy, crunchy English Muffins that blew away everything that came from a plastic bag or even from a restaurant. They had just enough salt to bring out the gentle yeast flavor that is lacking in the store-bought muffins.
I made Eggs Benedict that night with a delicious Hollandaise that I made for the first time also (and was just as delicious) and a poached egg. I served it with a spinach salad dressed with lemon-rosemary vinagrette. There was no waiting for pictures with this dish...the knife and fork got to it before the camera could and it was consumed lovingly.

The next morning I was eager to have some toasted with butter and Aunt Bea's homemade apricot jam. I encourage you to make these from scratch for a special brunch or "brinner" for your loved ones.

1. In a mixer bowl with a dough hook, sprinkle yeast over the water and gently mix. Let it sit for 5 minutes or until the mixture becomes foamy and the yeast dissolves.
2. Add 2 cups of the bread flour and the baking soda to the yeast and water and mix on medium low speed until smooth. Let this sit for five minutes while you whip the egg whites.
3. Whip the egg whites in a seperate bowl until stiff peaks form. Stiff peaks are formed when you lift the beaters and you have a short peak at the end. If you whip too long, the whites will dry out and break and you will need to beat new whites.
4. Gently mix the whites by hand into the dough with a wooden spoon until mostly combined.
5. Add the remaining flour 1/4 cup at a time with the mixer on low speed. Right before the mixture combines, you can add the next 1/4 cup of flour and after the second addition, you can add the salt.
6. Once all of the flour has been added and dough has formed, turn the speed up to medium high and mix until the dough is smooth and soft, about 10 minutes, but your time may vary.
7. Lightly coat a clean bowl with cooking spray, or oil and place the dough inside the bowl. Lightly spray or oil the top of the dough and cover with plastic wrap. Let the dough rise for 1 hour or until doubled in size.
8. Pour out the dough onto a flat surface. A large wood cutting board works best for me. Gently press out some air and then roll dough to 1/2 inch thick.
9. Let the dough rest for 3 minutes and using a 3 inch cookie cutter, cut rounds and place them on top of cornmeal. You may re-use the scraps by gathering them together and cutting more circles.
10. Sprinkle the tops with more cormeal, cover with plastic wrap and let the circles rest for 45 minutes.
11. Preheat an electric griddle to 350 degrees and lightly grease the surface with oil or cooking spray. Place the rounds on the griddle and cook each side for 4 minutes, then again, each side for 4 more minutes to have the total cooking time be 16 miutes. The tops will be golden brown and they will be firm when you press on them. Allow the muffins to completely cool.

Enjoy!
Posted by Mariel at 8:43 PM No comments: 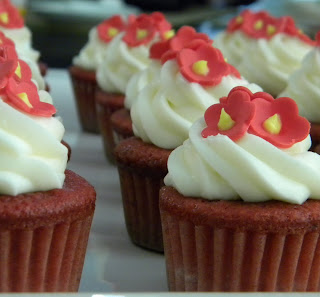 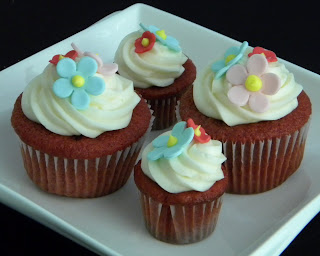 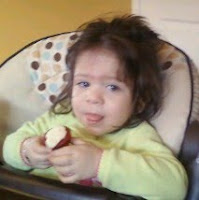 Posted by Mariel at 5:50 PM No comments: