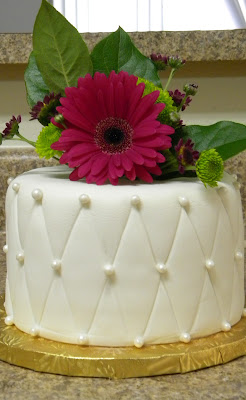 A few weeks ago my cousin’s wife wanted to surprise her husband with a small cake they could eat on their first anniversary. His choice for their wedding cake was chocolate cake with raspberry mousse and I, completely honored said, "Yeah! I would love to give you an excuse to throw away that frost bitten rock that has been sitting in your freezer amongst the hot pockets, chicken drummetes and unidentifiable leftovers that traveled 10 hours from Palm Springs...a year ago."
See, what happened was, the couple on their wedding day, in all of their wedded glory, could barely get away from the mingling, and dancing, and smiling to sit down and eat a piece of cake. But when they finally did, they found that the entire cake had been cut and served and the pieces that had been previously set at their table had mysteriously disappeared. The only thing that remained was the top tier which traditionally should be eaten on their first anniversary, so they couldn't slice that one up.

I modeled this cake after their original top tier and delivered it to their home. They took out the year-old, frozen rock of fondant then sliced into the cake I brought on their first anniversary. As romantic as the tradition of eating your cake a year later is, to me it's a little scary. Sure the cake is completely encased in sugar and is most likely perfectly harmless. But wouldn't the best reward for making it through the first year as a married couple be another cake? I think so.
Posted by Mariel at 10:39 PM No comments: