I am a copious note taker.


This comes from working in restaurants. If you didn’t want to get your head chewed off for forgetting something, you wrote it down. I also wrote down other things like simple kitchen math (1oz=28.35grams), slightly more difficult kitchen math and the formula and method for carrot cake. I drew pictures of plated desserts, pictures of how my low-boys need to be organized and pictures of my chefs on fire and so on.

This is when I fell in love with a perfectly sized, spiral bound, 9.5”X6”, college ruled notebook that Mead no longer makes. I have four of these. They tell my story, all the things I learned and everywhere I have been; every dessert I have made or ever wanted to make have been recorded and is in these books. I have a notebook that has all the notes I took while working for Metro, all the planning that went into my first OriginalCinn event, cakes I’ve designed, food I’ve eaten, my entire life in food since I began studying it is documented and smudged with chocolate and I carry one with me at all times.

Today at 9:38am, I wrote that I wanted to make honey ice cream.
To go with that honey ice cream, I thought of a few things I could make:
Seasonally, I could make a kumquat tea cake with rosemary sugar and a citrus salad…
Or because I know of a particular brand of local chocolate that would taste really good with citrus, a chocolate lava cake with vanilla scented mandarins and blood orange with a drizzle of olive oil….
OR fried cream puffs filled with ricotta and mascarpone, flavored with vanilla bean and lemon zest…ooh and served with spiced wine and blueberry sauce.

I think in dessert, then I write it down.
Posted by Mariel at 8:28 PM 1 comment: 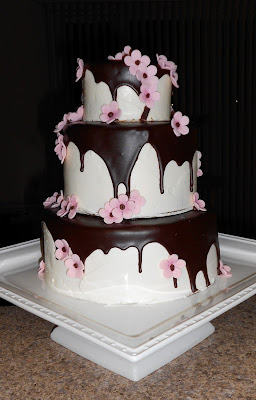 I'm trying to build up my wedding cake portfolio. It is slightly difficult when you really don't have anything to show a client but you're telling them for sure you can make a cake for them.
Please understand my hesitation. I have heard so many horror stories about wedding cakes and the people who say, "Oh yeah, don't worry, I will make you the most beautiful cake!" Then come wedding day, it flops over, it melts, it is lop-sided or just plain ugly. I absolutely do not want to make one of those cakes.
Those who know me, know my career has been based in restaurants and menu/recipe development. As I am looking at OriginalCinn, the business, it is important for me to develop my range of skills and one of those skills is wedding cakes. Any small cake, I can make, no problem but creating what is essentially a centerpiece of a wedding, is a lot of pressure. It has to be properly supported, the cake and the filling have to work together to be a part of that support and in the end it has to be absolutely beautiful. I have designed a wedding cake, orangey-pink with little birds, branches and some leaves. But, uh, if I really want to practice making this cake, well I need to bake, frost and decorate actual cake.
This cake was made at work. All three layers are expired cake from three different days (don't worry, no one ate it) and I wanted to practice stacking, and decorating something simple. I paid $.75 for the whole thing, so it wasn't too much of an issue for me to throw it away after it had sat out all night because I wanted to see how long it would stand.
So before I set out to make this cake that I have dreamed up in my head, I want to ask, what is your favorite cake flavor? Or what flavor of cake did you have at your wedding? Did you have a cake at your wedding? Is there a story to go with it?
Leave a comment and send me your story...I'd love to hear it!
﻿
Posted by Mariel at 12:55 PM 7 comments: 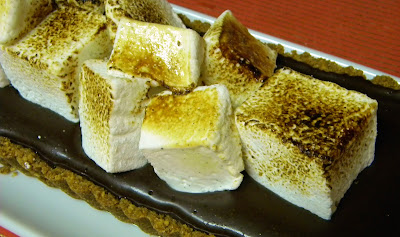 I mean actual, in the wilderness camping. As a Campfire Girl, the closest I ever got to a real campfire was a small tabletop barbeque set up in the backyard next to a tent. A sad, sad simulation of real camping. I did, for a few summers go to a motor home camp site where we did set up tents and sleep out of doors in the "woods" but then we woke up, to immediately jump into the heated pool.
Yeah, my childhood did lack the genuine camping experience but it did not lack The S'more.
Gooey, melty, chocolate crunchy goodness that got all over my face and my fingers. Best when the mallow lit on fire and it was completely charred before it went sandwiched in between grahams and a square of chocolate. It was my first experience with caramelized sugar and it was the greatest thing ever invented.
Hey, remember that scene...of course you do...in the Sandlot, how hil-ar-ious it was when Smalls didn't know what a S'more was? I was about 10 and already the thought that he had never, ever experienced the pure joy that is the S'more blew my mind. Ha! Good stuff.
This tart, like most everything else on this blog came from really craving the flavors of a Smor'e. So lets break this down:
The Graham-Honey, cinnamon, and a deep toasted flavor of graham flour.
The 'Mallow-Sugar, pillowy fluff and that charred caramelized 'mallow flavor.
The Chocolate-Really, all there needs to be is any kind of chocolate.
These are the fundamentals of the S'more, right? Yes but if you want a deep flavor, layered and saturated with the essence of the iconic childhood dessert, listen to what I did....
The graham cracker crust was flavored with cinnamon, vanilla bean and a touch of salt. The soft ganache, to mimic the melty-oozy chocolate was made with cream, honey and a mixture of 41% chocolate and 65% chocolate. The marshmallows, I purchased at Whole Foods but are a natural vanilla bean marshmallow that I torched to caramelize it's soft exterior.
What I ended up with was a really rich, flavorful dessert that could only be brought up right and posh, served with a port wine.
Posted by Mariel at 6:48 PM 2 comments: